You're having a laugh! Women have more TICKLISH feet than men

Young children are not just cheeky monkeys — it turns out they actually laugh like chimpanzees, too.

That’s because both babies and chimps chuckle while inhaling and exhaling, unlike adult humans who laugh mainly during exhalation, researchers have discovered.

The breathy, squeaky sound may happen because, like apes, babies do not have great control of their vocal tracts, so laugh as they inhale.

But as we age, our laughter becomes less chimp-like and more human, the Dutch researchers said.

Humans and chimpanzees are both great apes (Hominidae) and chimps are our closest animal cousins – but laughter is one behaviour in which adults of both species differ.

When an adult human laughs, they initially inhale before producing ‘ha ha ha’ sounds in short bursts, starting loud and then fading away, said study author Mariska Kret, professor of cognitive psychology at Leiden University in the Netherlands.

‘The [non-human] ape-type is more difficult to describe but there is an alternation huh-ha-huh-ha,’ she told CNN. 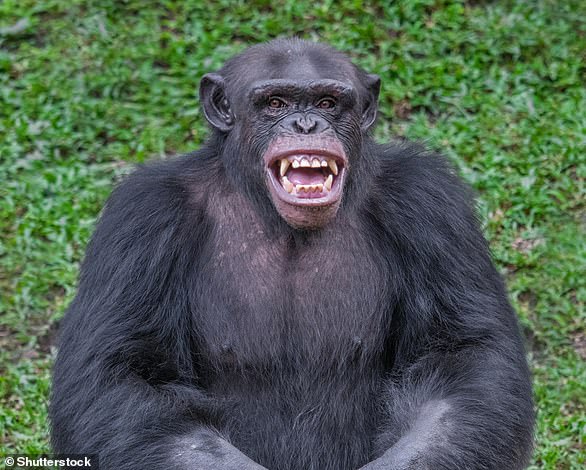 Humans and chimpanzees (pictured) are both great apes (Hominidae). The genus Pan consists of two extant species – the chimpanzee and the bonobo

As babies get older they start to laugh more like grown-ups – perhaps because this kind of laughter gets a better reaction from their parents.

‘This is not a subject which had really been looked at before but every parent knows young babies are like chimpanzees in lots of ways,’ said co-author Dr Disa Sauter at the University of Amsterdam.

‘It may be that babies learn to imitate their parents, which is why they grow out of this.’

For the study, the researchers collected audio clips of human babies aged somewhere between three months and 18 months old as they laughed.

It was the older infants in the sample – the ones nearer the 18-month mark – who exhaled more as they laughed.

This suggests that during this key period of development – between three and 18 months old – infants learn to exhale when they laugh.

Laughter produced by exhaling tends to be louder, Professor Kret told CNN, which makes it easier for infants to communicate that they are having fun and want to continue playing.

As babies get older, they learn the ‘communicative function’ of laughter and that this communication is better achieved by exhaling rather than inhaling, she said.

It may be that babies subconsciously adapt their laugh to get the best reaction from their parents, like laughter, a smile or more eye contact.

Parents, meanwhile, see that their baby is actively trying to make something clear.

In a further experiment, 102 people were asked to rate clips of laughing babies and adults without focusing on their breathing.

Researchers found they preferred more singsong adult-style laughs even when they were not thinking about the style of the laugh.

‘This study began because our lead author was played a video of her friend’s baby laughing and thought it sounded just like a chimpanzee,’ said Dr Sauter.

‘Of course she didn’t say that to the mother! But it got us thinking, and we discovered this similarity, which parents might want to listen out for.

‘It just shows that our behavioural repertoire is ancient, and inherited from the common ancestor we share with the apes.’

The study, entitled ‘The ontogeny of human laughter’, has been published in the journal Biology Letters.

Cancer-stricken woman, 49, 'saw her disease vanish after resorting to magic mushrooms and cannabis'

Botox 'may banish the blues'