Zantac ruling is a shot in the arm for GSK: US judge rules heartburn drug cancer claims are based on flawed science

GlaxoSmithKline (GSK) shares rose to their highest level in five months after a US judge dismissed thousands of lawsuits relating to its heartburn drug Zantac.

The FTSE 100 pharma giant, alongside several rivals including Pfizer and Sanofi, has been at the centre of a legal storm concerning the medicine, which was pulled from shelves in 2019 amid concerns that one of its ingredients caused cancer.

But the firm’s shares surged 7.5 per cent, or 104.6p, to 1492.4p after a judge in Florida ruled that around 2,500 lawsuits were based on flawed science and that the only reliable testing of the drug had shown no provable risk of cancer. 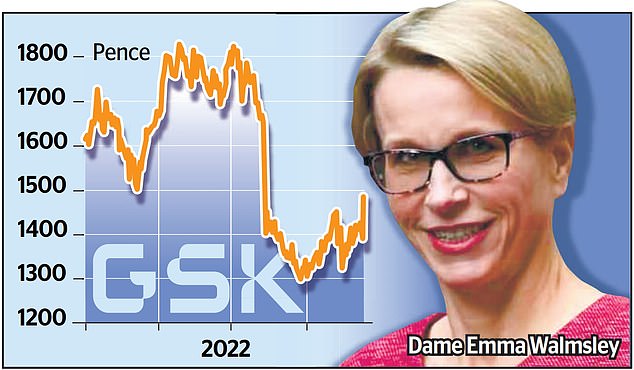 GlaxoSmithKline surged 7.5% after a judge in Florida dismissed around 2,500 lawsuits relating to its heartburn drug Zantac

Meanwhile, Haleon, GSK’s old consumer healthcare arm, which was spun out in July and has also seen its share price suffer due to concerns it could be caught up in the legal wrangle, rose 3.6 per cent, or 10.5p, to 305.7p.

The decision effectively strikes out about 50,000 claims in the federal courts, although tens of thousands of other cases remain unaffected and are pending in states across the US.

GSK said the decision had ‘ensured that unreliable and litigation-driven science did not enter the federal courtroom’, and it would ‘continue to defend itself vigorously’ against all claims.

The ruling is a big win for chief executive Emma Walmsley after a heavy hit to the shares over the summer when the lawsuits garnered wide attention.

Shares in Sanofi, another pharma giant involved in the case, rose around 6.1 per cent on the Paris stock exchange.

A company spokesman said the court decision ‘significantly decreases the scope of the litigation potentially by over 50 per cent’, while Boehringer Ingelheim, a privately-owned German drugmaker, said it looked forward to continuing its ‘vigorous defence’ in the remaining cases.

AJ Bell investment director Russ Mould said the ruling provided ‘timely pain relief’ for GSK and the outcome was ‘probably the best’ it could have hoped for.

‘While there is some risk of an appeal, and there are other cases outstanding, GSK will be sitting a lot more comfortably than it was before this judgment was handed down,’ he added.

Meanwhile, analysts at broker Jefferies said the ruling ‘bodes well’ for the company as it turned its attention to the state courts, adding that the judgment was likely to dent the motivation for lawyers to bring more cases.

Of particular interest will be the outcome in the US state of Delaware where over 90 per cent of the lawsuits, involving around 40,000 plaintiffs, have been filed.

Zantac was originally approved in 1983 and became one of GSK’s best-selling medicines, raking in over $1billion per year in sales.

It was later sold to successive pharma companies including Pfizer, Sanofi and Boehringer, while generic versions of the drug were also manufactured.

But in 2019, sales of Zantac were halted over concerns its active ingredient, ranitidine, degraded over time to form NDMA, a chemical that is found in low levels in food and water but can cause cancer in larger amounts.

The following year, the US Food and Drug Administration pulled all Zantac brands and generic versions from the market after citing research showing that the amount of NDMA in the products increased the longer the drug was stored and that it could potentially become unsafe.

Following that, legal cases have begun piling up, with plaintiffs saying the companies knew, or should have known, that ranitidine posed a cancer risk and failed to warn consumers.

Bestinvest names top funds it thinks will outperform the market