Putin ‘much weaker than we think’ says John Sweeney

Nico Lange, who is chief of staff for Christine Lambrecht, Germany’s Federal Minister of Defence, was speaking days after British military intelligence claimed Putin had fired several commanders as a result of the nation’s “poor performance” since the start of the war on February 24. Russia is struggling to gain a foothold as vast quantities of military aid pours in to bolster the campaign being spearheaded by Ukrainian President Volodymyr Zelensky, Mr Lange said.

The supply of equipment is being coordinated at a US base near the German city of Stuttgart, with roughly 50 nations providing gear, a report by Deutsche Well suggested, including the highly effective High Mobility Artillery Rocket System (HIMARS), as well PzH 2000 self-propelled howitzers from Germany and the Netherlands.

Mr Lange claimed the weapons were changing the face of the conflict, explaining: “The crucial aspect of the past few days is that Russia is now being forced to react to the Ukrainians’ statements and actions.

“Until now, it was the other way around: The Ukrainians were forced to react to everything Russia did.” 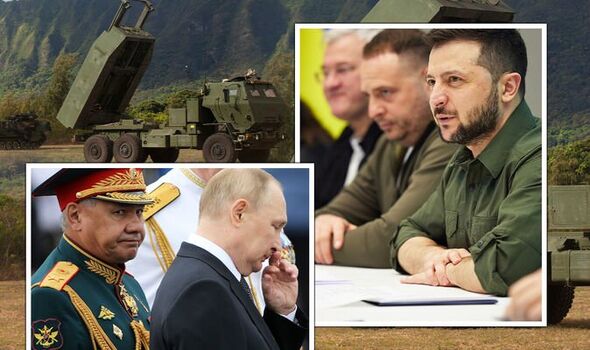 Ukrainian forces launch a HIMARS rocket from an unspecified location in the country (Image: Reuters)

In recent days, Russia had “moved significant forces to the south, toward both Kherson and Zaporizhzhia,” which have in recent weeks become the focus of significant counteroffensives, Mr Lange said.

He added: “A Ukrainian attack will not look like the Russians’: this rolling barrage that destroys everything in its path.

“Rather, it will also rely on partisans, on uprisings in the occupied cities, on mobile operations behind enemy lines.”

HIMARS rockets are accurate of a range of up to 185 mile (Image: Reuters)

Mr Lange continued: “The Russians are having great problems controlling these areas.

“There is a lot of partisan activity in the occupied part of Zaporizhzhia oblast. Russian patrols are being killed at night.

“In Melitopol, too, as in Kherson, there are posters directed against the Russian occupiers, there are leafleting campaigns. Something new is constantly being put up.”

With Putin unable to “escalate indefinitely”, he was now facing “tremendous” difficulty in continuing the conflict, Mr Lange said.

The M142 HIMARS, touted as a “gamechanger” by the West, can be loaded with a total of six precision missiles, guided by GPS. Able to be loaded with six precise GPS-guided missiles, a HIMARS is capable of hitting targets of just over 185 miles.

Since they were initially provided in June, one senior UN defence missile estimated that by the end of last month, more than 100 “high value” Russia targets had been destroyed.

An MoD tweet yesterday said: “The poor performance of Russia’s armed forces during its invasion of Ukraine has been costly for Russia’s military leadership, highly likely resulting in the dismissal of at least six Russian commanders since the start of hostilities in February 2022.”

Russian air defence systems repelled a Ukrainian strike on Melitopol in southern Ukraine, undertaken in the early hours of this morning, a senior official in the Zaporizhzhia region’s administration told the state-backed Tass news agency.

Vladimir Rogov, a council member of the Zaporizhzhia Region’s military-civilian administration, said: “This night, Russian air defences protected citizens of Melitopol from a yet another rocket attack.”

Melitopol fell in the early stages of the war after fierce fighting between February 25 and March 1.

Mass civilian protests followed, and on March 13, the Melitopol City Council declared: “The occupying troops of the Russian Federation are trying to illegally create an occupation administration of the city of Melitopol.”

Meanwhile UN Secretary-General Antonio Guterres called on Monday for international inspectors to be given access to the Zaporizhzhia nuclear plant after Ukraine and Russia traded accusations over the shelling of Europe’s largest atomic plant at the weekend.

Speaking at a news conference in Japan, where he attended the Hiroshima Peace Memorial Ceremony on Saturday to commemorate the 77th anniversary of the world’s first atomic bombing, he said: “Any attack to a nuclear plant is a suicidal thing.”

Russian forces captured the plant in southeastern Ukraine in early March but it is still run by Ukrainian technicians.

The Russian-installed authority in the area said Ukrainian forces hit the site with a multiple rocket launcher, damaging administrative buildings and an area near a storage facility.