Zendaya steps out of her hotel with a pal in Rome

She is the face of a new Valention campaign at the luxury Italian fashion house.

And following the launch of the range, Zendaya was spotted in the capital city as she left her hotel accompanied by her entourage on Sunday evening.

It’s unknown whether Zendaya’s visit was linked to the campaign, and it is possible the actress, 25, is in Italy ahead of Milan Fashion Week which begins on Tuesday, after making a splash in the fashion world with her daring looks. 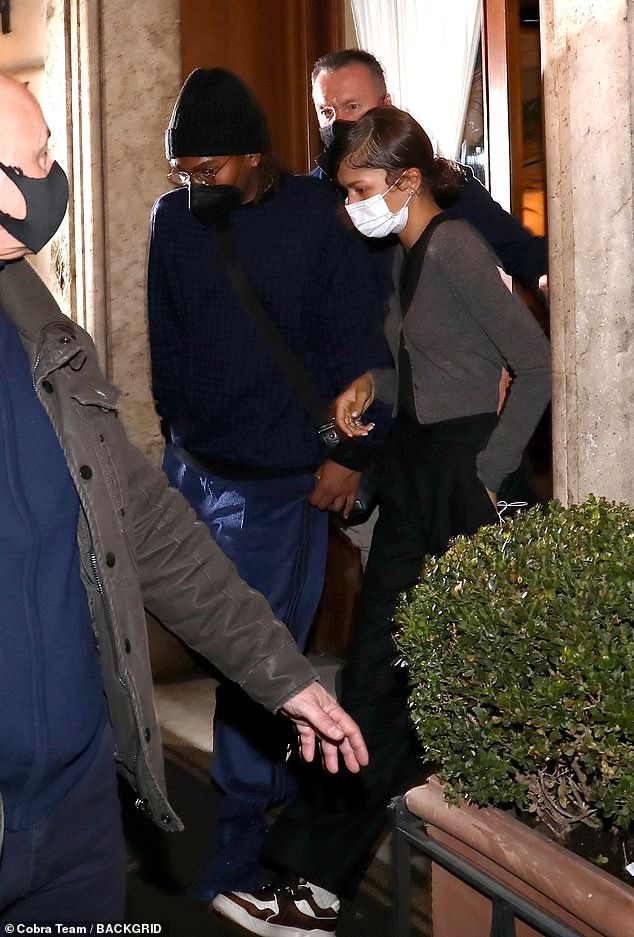 Heading out! Zendaya was spotted in Rome as she left her hotel accompanied by her entourage on Sunday evening

While the Euphoria star is typically glad in eye-catching ensembles, she opted for a dressed down look while stepping out into the streets of the capital.

She wore a black top layered with a grey cardigan and slouchy trousers, which she teamed with a pair of black and white low Nike dunks.

The Spider-Man actress wore her curly locks swept back in a ponytail and covered the majority of her pretty visage with a face mask. 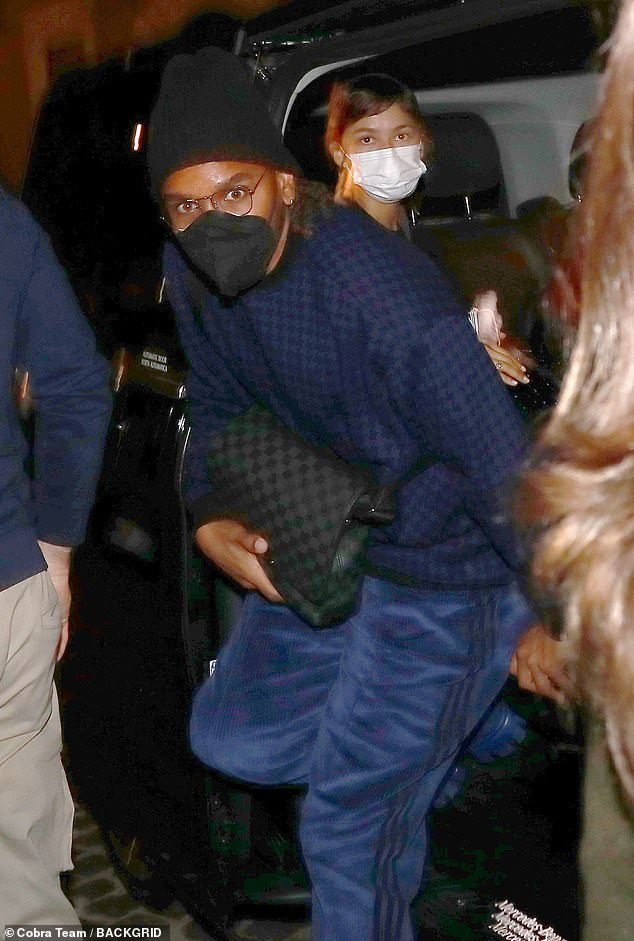 Dressed down: While the Euphoria star is typically glad in eye-catching ensembles, she opted for a dressed down look while stepping out into the streets of the capital

It appeared that Zendaya had put a mask on before hopping in a waiting taxi.

She was joined by a stylish male pal, who was wearing a navy houndstooth jumper with a pair of blue velour tracksuit pants.

He accessorised the off-duty look with a beanie hat, glasses and a black Gucci bag.

It comes after the former teen actress insisted that Euphoria isn’t a ‘moral tale’.

Zendaya insisted the show has set out to reassure viewers they are not ‘alone’ in their struggles, but it’s never encouraged the audience to live their lives in a particular way. 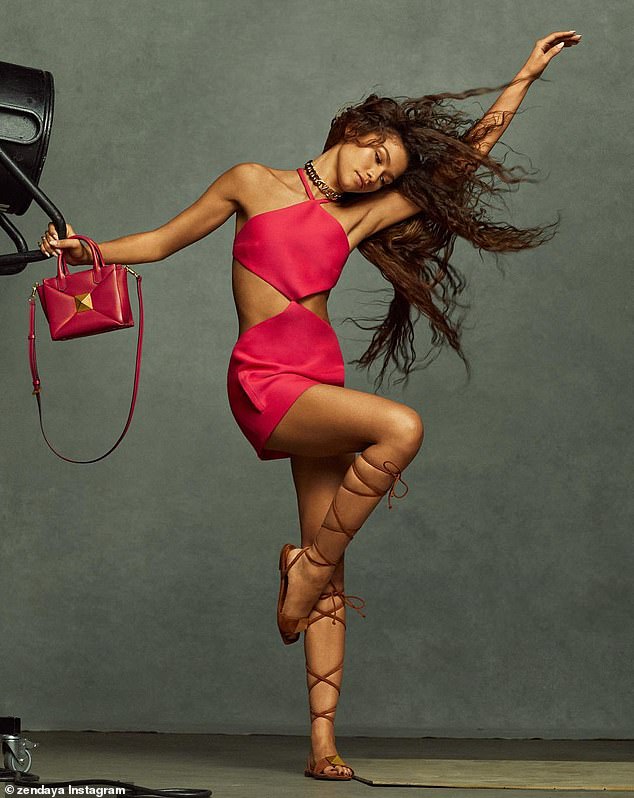 Wow! Zendaya is the face of a new Valention campaign at the luxury Italian fashion house

She told Entertainment Weekly: ‘Our show is in no way a moral tale to teach people how to live their life or what they should be doing. If anything, the feeling behind ‘Euphoria,’ or whatever we have always been trying to do with it, is to hopefully help people feel a little bit less alone in their experience and their pain.

‘And maybe feel like they’re not the only one going through or dealing with what they’re dealing with.’

Season 2 of the HBO series culminates in an intervention for Zendaya’s character Rue, which the actress called the ‘light at the end of the tunnel’ and she hopes her alter ego’s experiences allow viewers to gain ‘a little bit more understanding and [be] empathetic over the experience of addiction.’

She added: ‘My biggest hope is that people are able to connect to it and those who need to heal and grow with Rue hopefully, by the end of this season, feel that hope and feel that change in her.’

While working on the show, Zendaya has heard from a lot of viewers who see ‘parallels’ from their own lives and she admitted their messages mean a lot to her. 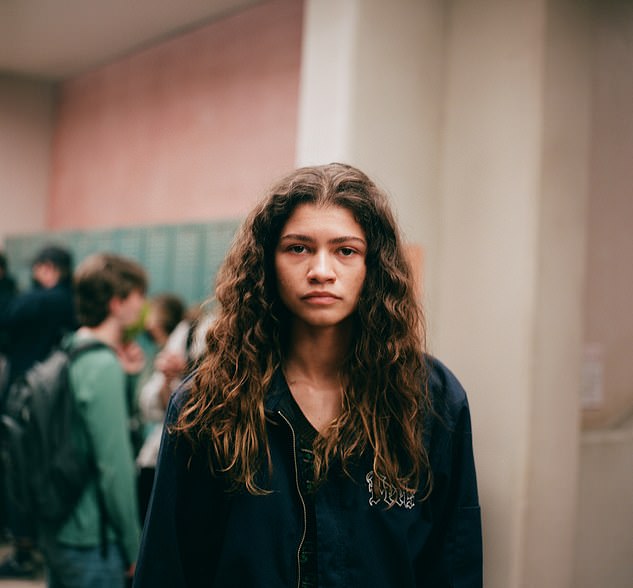 No morals  here: This comes after the former teen actress insisted that Euphoria isn’t a ‘moral tale’; D.A.R.E. have accused the program of normalizing teen drug abuse

D.A.R.E. have accused the program of normalizing teen drug abuse.

They said in a statement last month: ‘Rather than further each parent’s desire to keep their children safe from the potentially horrific consequences of drug abuse and other high-risk behaviour…

‘It is unfortunate that HBO, social media, television program reviewers, and paid advertising have chosen to refer to the show as ‘groundbreaking,’ rather than recognizing the potential negative consequences on school-age children who today face unparalleled risks and mental health challenges.’

Share
Facebook
Twitter
Pinterest
WhatsApp
Previous articleMonzo issues urgent warning to all banking customers and ignoring it could be costly
Next articleEU infighting: Irish commissioner to seek compensation after being forced to resign by VDL
RELATED ARTICLES
Tv & Show